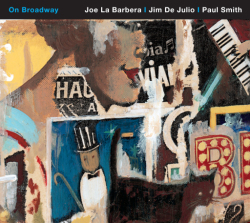 Jazz and Broadway have had a long and varied relationship, especially in the days when musicals were both numerous and affordable. Back in the 1950s and 1960s, part of certifying any musical a hit was recording an album of jazz versions of its songs. And many of the standards central to the jazz repertoire - songs by the Gershwins, Richard Rodgers, Cole Porter, Irving Berlin, Jerome Kern, Harold Arlen, and so many others - were written for Broadway.

You could use the word “eminent” to describe the trio playing this batch of Broadway standards for you, but that sounds entirely too serious for such delightful companions.

Paul Smith is probably the world’s best-known unknown pianist. Paul’s been a studio ace for well over 40 years and was probably most visible during the 5 years he accompanied Ella Fitzgerald. Cherished by his colleagues, Paul is the most chameleonesque of piano players, sounding like whomever he chooses, thanks to a technique and memory that operate at the speed of light.

Drummer Joe La Barbera played an important role in jazz history as the drummer in Bill Evans’s last trio. It was a group that Evans, himself, acclaimed as possibly his best ever.

Bassist Jim De Julio boasts similar credentials, having recorded numerous albums under his own name and gigged with almost everyone worth gigging with on the West Coast and elsewhere. If you buy CDs or go to movies, you’ve heard Jim.

He makes so many allusions that you could call Paul Smith the James Joyce of jazz, if it weren’t way too pretentious a handle to lay on such an informal man. But what would you call a musician who figures out how to throw in a lick from Grieg’s Peer Gynt in the middle of “My Favorite Things?” Not even John Coltrane did that while making a jazz standard out of this surprising choice from 1959’s The Sound Of Music.

They continue with a harmony-drenched version of “Spring Can Really Hang You Up The Most” from 1957’s The Nervous Set. Paul’s chords are rich enough to restore the gold standard, nicely evoking the rainy season. His quote from “I Only Have Eyes For You” is a characteristic bit of humor, the phrase’s lyric going: “I don’t know if it’s cloudy or bright…” He also quotes “Time On My Hands” and a few others while traipsing through this garden of a song.

Jim gets into the interpolation act on “I Could Have Danced All Night”, quoting “Yessir, That’s My Baby”. Obviously, one of this group’s chief missions is to find the songs hiding in every song.

Rodgers and Hart’s exquisite “Where Or When” receives a more serious, layered performance. Paul’s refreshment of the harmony gives way to an extended tribute to the popular George Shearing quintet of the 1950s. What’s really remarkable about this impersonation (which is more an evocation of an era than mere mimicry) is that Shearing’s quintet was famous for the sound of the vibraphone doubling the piano line. Of course there are no vibes here. But Paul’s so cool about recreating the sound, you actually think you can hear vibes in his rippling block chords. And still with the quotes - Gershwin’s “Rhapsody In Blue” for one. Paul is still in his Shearing mode in Rodgers and Hart’s equally moving “Falling In Love With Love”, adding some very effective afterbeat phrasing.

There’s absolutely no good reason to record Cole Porter’s “I’ve Got You Under My Skin” unless you’re going to do something different with it. So what does Paul do with it? He lets it inspire his most notable performance of this session, in my opinion. The version he gives you combines his legendary technical facility, matchless ability to sound like any pianist he wants, and his sense of playfulness - all in one remarkable, tightly edited performance. If you aren’t familiar with other jazz pianists, it’s a great track. If you are familiar with them, it’s downright moving.

Paul’s choice is to revive the style of contemporary jazz piano’s happiest master - Errol Garner. It’s an unmistakable and uplifting sound—those syncopating left-hand chords and lagging right hand melody statement. All that’s missing are Garner’s patented growls, which you can easily imagine if you’ve ever heard them. The break is sheer Garneresque bliss. No one said a word about Garner when Paul came into the booth to listen to the take. When this break came he said “I really missed him when he went. He was the happiest of us”. He meant Garner.

The magic of recordings, along with the vitality of great jazz, confers an exultant, unpretentious immortality.