George Cables - You Don't Know Me 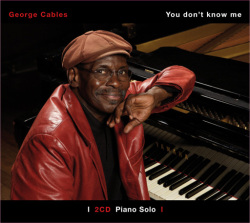 Available now in record stores and on
iTunes

Specially-priced 2CD set of new solo recordings by the great George Cables features standards such as "Waltz for Debby", "My Foolish Heart", "Up Jumped Spring", "Smoke Gets in Your Eyes", three African-American spirituals and nine George Cables original compositions.

This is the followup to his highly successful "Letter to Dexter" (KOB 10006) which received unanimous praise from jazz critics.

a note from the producer

When George Cables decided to go into Avatar Recording Studios, NYC, with me in late Spring of 2007 and let me produce his double solo CD – I was thrilled, to say the least. Long being my favorite piano player in the jazz world, I had been fortunate enough to produce George before on a record with Victor Lewis and Rufus Reid andwith David Baker engineering. It was a wonderful trio and a fabulous tribute to Dexter Gordon. But being able to produce George – just George – playing 21 different compositions (many of which are his own), was – well - about as close to heaven as anyone can get if you love listening to pure, gorgeous jazz piano. I was in tears at times, sitting at the console, experiencing and discovering parts of George I never knew. As we were wrapping up the production, and I examined the possibilities for a name for this solo record, I was pondering how so many of us don’t really know this genius and what he has inside of him to give. And then my eyes came to rest on the song, “You Don’t Know Me”. And it was an “Aha” moment…the name of the record was as evident to me as was this great musician’s marvelous and blissful talent.

The title track, “You Don’t Know Me” is a dichotomy of terms when if, in fact, we feel this at the beginning of the record, there is no doubt that by the end of the last track, the listener will have a very good idea of just who George Cables has been, is now, and will remain in this long awaited solo journey.

a note from the artist

Until now, the vast majority of my recordings have been in ensembles: (Trios, Quartets, Quintets, sometimes Duets). With the exception of a couple of CD’s, this record is pretty much a departure from that usual instrumentation. Solo piano is such a very personal thing – for both the piano player and the listener. It’s just you, the piano, and your own thoughts and feelings.

The music chosen for this CD includes eight of my own pieces. The first six of which are for family. EVC is for my mother, Lullaby and Helen’s Song for Helen, Helen’s Mother’s Song – well, that’s obvious – and Spookarella and Honey Lulu for two of Helen’s sisters. The Wayne Shorter composition, Anna Maria, is for Helen’s third sister, Ann Marie, because I’ve not finished her song yet.

There are also three spirituals, some standards, a few jazz standards, and a country and western song. All of which have personal meaning for me.

This CD would not have been done without the encouragement of Roy Tarrant. Thank you.

Cables imparts to each tune a perspective at once fresh and lived-in, imparting the playful, spontaneous attitude of an artist who has nothing to prove. It's a masterful performance.