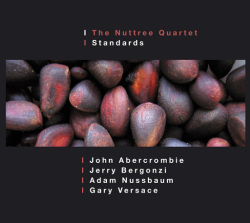 produced by maxine production for kind of blue records

The Nuttree Quartet will release its first album – entitled “Standards” for Kind of Blue Records in March 2008.

They will be touring Switzerland, Germany, Sweden, Denmark and France to support the CD, in late March and early April.

This is most definitely a “supergroup” by any definition. As Adam Nussbaum puts it in the liner notes… “We are all friends and have played with each other many times but never in this exact combination. It’s something we all had a desire to do”. This is very much a collaborative project

John Abercrombie is a master of the modern jazz guitar. His “progressive” style - clear and transparent, yet never distant from authentic “jazz” swing - has characterized the distinctive ECM sound.

Jerry Bergonzi is only now being recognized as one of the most important saxophone players in jazz. After his work with Dave Brubeck he has gone on to to play with many of the finest musicians around.

Adam Nussbaum (the name “Nuttree Quartet” derives from the German “walnut”) is one of the great drummers of our time. He has recorded and performed with John Scofield, Steve Swallow, Stan Getz, Miroslav Vitous, Joe Sample and many many others.

Gary Versace on Hammond B3 organ is according to “Downbeat” readers the best organ player on the scene today. He has recorded and toured with Maria Schneider, John Scofield, John Abercrombie etc.

The “Standards” album for “Kind of Blue Records” was recorded in February, 2007 and features such great tracks as Gershwin’s “Here to Stay”, Ellington’s “Come Sunday”, Wayne Shorter’s “12 More Bars to go” and “Footprints”, Monk’s “Eronel”, Coltrane’s “Naima” among others. It is a “classic” album in all senses and for all senses – a very original take on the “standards” by a group of master musicians.