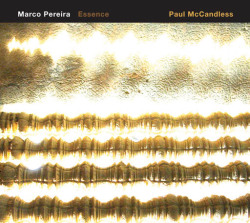 Essence. Brazilan essence. This is an album of rare beauty and elegance and yet an album of understated power. Below Its surface of fragmented light lies a hidden deep of emotion. All is pure. All is crystalline (as the first track -“ Cristal “– suggests) but there is plenty of black light (“Luz Negra”) too. Marco Pereira has become known not just as Brazil’s greatest guitarist since Baden-Powell but also as an important contemporary composer.
He first studied classical guitar in his native Sao Paolo but it was the years he spent at university in Paris which were formative to his future work and where he developed his skills in fusing jazz with latin music. He has performed and made recordings not only in his own right but also with some of Brazil’s finest musicians including Edu Lobo, Milton Nascimento, Antonio Carlos Jobim, Daniela Mercury Hamilton de Holanda and Gilberto Gil.
He tours regularly with American guitarist Ralph Towner. Special guest is Paul McCandless (a member of Oregon with Ralph Towner). Paul McCandless began his career as a classical oboist but always had a passion for jazz. He is skilled in all woodwind instruments and has performed the world over with the likes of Jaco Pastorious, Carla Bley, Wynton Marsalis, Steve Reich and Al Jarreau.

...this is wonderful stuff and sounds just as good as Oregon at their best... this really is an excellent record...
- 24dash.com (UK)

...devotion to superior sound is evident...Pereira's arrangements are filled with drama and movement...
- Downbeat