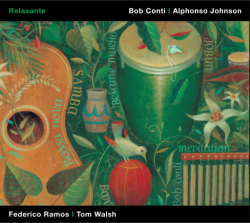 It was none other than Jelly Roll Morton, the self-proclaimed inventor of jazz, who identified “that Latin tinge” as one of jazz’s basic ingredients.

The explicit eroticism of Latin music is its most compelling element. If you want to confirm this, venture to a Latin nightclub in any major American city to experience some of the sexiest dancing you’ll ever see. Indeed, before the night is through, you’ll probably find yourself on the dance floor, gyrating quite nicely, thank you, by adapting certain movements you’re used to making lying down to a standing-up posture. Big hips, little feet, along with some “attitude” is all it takes.

This wonderful earthiness grows out of the rhythmically intense, percussion-based nature of Latin tunes, especially their Cuban and Brazilian forms, although no partnered dancing is more highly charged and expressive than the tango as performed by a thoroughly conversant couple, regardless of their age.

Bob Conti and friends play a fine group of standards and original bossa novas for you largely in the Brazilian style, which combines native Indian, Afro-American and European influences into one of the world’s most attractive and accessible musical forms. Floating on the subtle, sensual wave of the bossa nova very much in the way it was first introduced to los Americanos del Norte by tenor saxophonist Stan Getz in the early 1960s, it sounds sophisticated yet richly colored, subtle yet infused with an immediately identifiable personality.

Federico Ramos’s guitar limns in each of the timeless melodies chosen for this set, its acoustic nature keeps it well within the envelope of the mix. Freddy makes sure each melody rides gracefully over the ineffable inflections of Bob’s percussion voices, Tom Walsh’s drums and Alphonso Johnson’s tastefully articulated electric bass lines.

“Night & Day” shows how well Cole Porter’s sinuous melodies adapt to bossa nova. Of course, Porter himself was no stranger to Latin music, having created a marvellous, unlikely Latin hit with “Begin the Beguine.”

“Felicidade” is one of several native bossa novas on this CD from the pens of such Brazilian masters as Jobim and Barroso.

Woven smoothly together with luminescent standards like “My Foolish Heart” and “All The Things You Are,” this foray into Brazilian-based jazz gives you a program infused with easy allure and perfectly delightful swing.