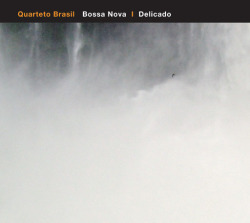 This is a an ethereal record. The continual return of the haunting central theme creates a hypnotic dream-like atmosphere giving the whole work a symphonic tone-poem quality. This is not traditional Brazilian bossa-nova but a finely woven textural work.

Comparisons have been made with Chick Corea’s legendary “Return to Forever” but these pieces are also deeply original – Cristóvão Bastos, Quarteto Brasil’s leader, arranger and principal composer has been an important figure on the Brazilan music scene for almost fourty years.

At just 18 years of age Cristóvão Bastos started playing piano in the clubs of suburban Rio de Janeiro and went on to play and arrange for the likes of Chico Buarque, Nana Caymmi, Edu Lobo and Gal Costa. In 1999 he co-wrote ‘Raios de Luz’ for Barbra Streisand which appeared on her ‘A Love Like Ours” album.

An important component of the ‘Quarteto Brasil’ sound is the saxophone of Zé Canuto which underlines all of major melody lines. Zé has recorded with Gal Costa, Chico Buarque, Edu Lobo, Ivan Lins, Daniela Mercury, Milton Nascimento, Flora Purim, Airto Moreira, Michel Legrand and many others. Bororó has been professionally active for over 20 years.

A very versatile musician, accomplished on a number of string instruments, Bororó stands out as a bass player. Lauded by Peter Gabriel, he has played and recorded with Gal Costa, Marco Pereira, Caetano Veloso, Joao Bosco, Oscar Castro Neves, Milton Nascimento and Gilberto Gil and was featured on a Kenny Rankin album with Toots Thielemans and Michael Brecker. Drummer Jurim Moreira is well-known in Europe, having performed at major jazz festivals such as Montreux and UmbriaJazz with Gilberto Gil and Gal Costa.

...an almost insouciant virtuosity; a delicacy of approach that in no way compromises drive, verve and pep; and an ear for a winsome melody, infused with melancholy, but which somehow uplifts. This is another classy production from a label that has hit the ground running, and the name of which is now a guarantee of quality
- Vortex Online (UK)

...sublime, sensuous, and swinging... dynamic and delirious... sweet and subtle... there is life after Jobim.
- All That Jazz (USA)