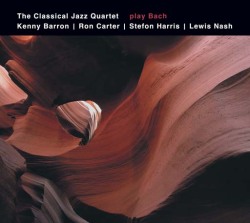 Originally released four years ago on the small Vertical Jazz label, the existence of The Classical Jazz Quartet play Bach was unknown to the majority of the jazz public and, as a result, the album failed to make the impact it deserved. However, following the highly positive critical and commercial response to the release of The Classical Jazz Quartet play Rachmaninov earlier this year, this important milestone in jazz is set to be given a new lease of life as it is re-released in re-mastered form on Kind of Blue.

The music of Bach provides the perfect framework for this group to display their balance of emotion and technical precision. Kenny Barron is in typically inspired form and the quartet mingle beautifully around Ron Carter’s supple, melodic bass lines and Lewis Nash’s discrete and gently propulsive beat. On play Bach, the band’s interpretation of "Jesu, joy of man’s desiring" demonstrates their ability to shift mood in a single phrase and their arrangement of the ‘Brandenburg concerto #2’ is full of energy and creativity.

...the all-star CJQ shows how it should be done. Distinguished elder-statesmen Carter and Barron and relatively-young lions Harris and Nash really do engage with Bach's themes as they would any other raw material, doing great credit to themselves and the composer.

...it's obvious that they enjoyed themselves immensely.
- All Music Guide