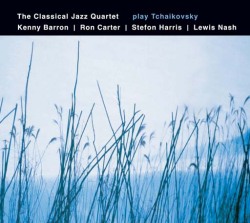 Originally released five years ago on the small Vertical Jazz label, the existence of The Classical Jazz Quartet play Tchaikovsky was unknown to the majority of the jazz public and, as a result, the album failed to make the impact it deserved. However, following the highly positive critical and commercial response to the release of The Classical Jazz Quartet play Rachmaninov earlier this year, this important milestone in jazz is set to be given a new lease of life as it is re-released in re-mastered form on Kind of Blue.

The music of Tchaikovsky provides the perfect framework for this group to display their balance of emotion and technical precision. Kenny Barron is in typically inspired form and the quartet mingle beautifully around Ron Carter’s supple, melodic bass lines and Lewis Nash’s discrete and gently propulsive beat. Play Tchaikovsky is based on the composers ballet The Nutcracker Suite and a hard swinging version of “Dance of the Sugar Plum Fairy” appropriately entitled “Groove of the Sugar Plum Fairy” is amongst the highlights.