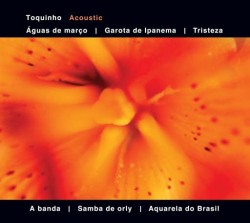 produced by toquinho
recorded in brasil

Antonio Pecci Filho – known as Toquinho – was born in São Paulo on July 6, 1946. Toquinho has become one of Brazil’s most popular artists and that country’s finest guitarist. He first became interested in the guitar at 14 studying the techniques and styles of Baden Powell and Oscar Castro Neves, learning first the intricacies of accompaniment before progressing to original solo work. It was his first recording with the legendary Chico Buarque de Holanda in 1967 which led to a major world tour together. Sometimes they performed with the great Brazilian composer and singer Vincius De Moraes.

Over the years Toquinho has also performed and worked with Tom Jobim, Maria Creuza, Miucha, Paulinho Nogueira and Baden Powell, playing before hundreds of thousands of people worldwide.

His brilliant style is distilled perfectly in this Kind of Blue recording.

This beautifully engineered CD will be of great interest to fans of Brazilian and Latin jazz.
- All Music Guide