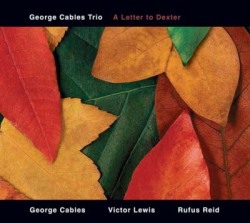 To me, Dexter Gordon didn’t just play JAZZ, he was JAZZ. He left Los Angeles at the age of 17 with the Lionel Hampton Band and later played with Louis Armstong’s Band and Billy Eckstine. He was a major exponent of the Bebop concept and directly influenced John Coltrane, Sonny Rollins and others. (He called them his sons).

The years I spent playing and traveling with Dexter are some of the most rewarding moments in my life. Listening while Dexter told tales of his experiences and jazz history was exciting, but nothing could compare to the sheer joy of making music night after night with Dexter and the band.

This CD is a thank-you note to Dexter for sharing his stories, his talents, his music, and his Dexterness with us. The music is a combination of Dexter Gordon compositions and songs that he liked to play - songs that make me think of Dexter. One thing that Dexter felt strongly about was the importance of knowing the words to the songs that he played. He felt that one would have a better understanding of the song and the phrasing of the melody if one knew the words. One of the unique things that Dexter would do was to recite the lyrics of the first eight measures of the song for the audience.

In the band with Dexter was the legendary drummer Eddie Gladden and virtuoso bassist Rufus Reid, truly a magical combination. Unfortunately, Eddie has since passed away. But happily, Victor Lewis, another Dexter Gordon alumnus was able to join Rufus Reid and myself for this project. There's considerable magic with this combination as well, I think. I hope you enjoy listening to this tribute to Dexter as much as we enjoyed playing the music in his honor.

catalonian nights
This is Dexter’s tribute to Barcelona.
three o’clock in the morning
Dexter was closely associated with this song.
cheese cake
Dexter would introduce this song by saying, “This is about something very good to eat!”
polkadots and moonbeams
Dexter once told me that he saw Lester Young quietly recite the lyrics to an entire song to the band before playing it. Dexter just recited the first eight bars to the audience.
tanya
the girl upstairs. No one makes the bass sound like Rufus.
fried bananas
it became a Bebop tradition to write a new melody over the structure of a “standard” or popular song. This was Dex’s offering using the chords of “It Could Happen to You.”
body & soul
This arrangement is Dexter’s tribute to John Coltrane.
i told you so
This is my piece and it was Dexter who gave it the title.
who can I turn to?
One of my personal favorites.
ltd (long tall dexter)
The theme song of the band.
‘round about midnight
Dexter was nominated for an Oscar for best actor in the film “Round Midnight.”
- George Cables

...this album is not only a reminder of Gordon, but also of Cables himself - a pianist with marvellous poise and touch
- Martin Gayford, Daily Telegraph (UK)

...some mighty fine music and enough good vibes to make you feel happier with the world...
- All About Jazz (UK)