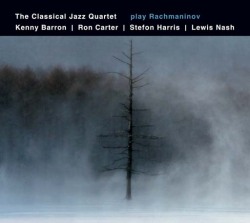 The Classical Jazz Quartet's first two recordings “Play Tchaikovsky” and “Play Bach” were released to great critical acclaim. Arranged by Bob Belden and produced for the Vertical Jazz label they have been unavailable since 2003. These much sought-after recordings will be re-issued fully re-mastered from the original tapes by Kind of Blue later this year.

“Play Rachmaninov” is now released for the first time and features the Piano Concerto #2 in C Minor. Bob Belden, who has worked with the likes of Herbie Hancock and Sting as well as being a successful Blue Note artist in his own right (and also producer of the acclaimed Miles Davis re-issues on Sony), is again the arranger.

The Classical Jazz Quartet is truly the jazz supergroup, regularly performing together in the US. Their music is at the same time both original and timeless – and most definitely jazz!

Kenny Barrron is now recognized as one of the most important pianists of his generation. A musician of true creative talent he is perfect in this setting. Ron Carter’s accomplishments certainly need no introduction - he is the master of the double bass. After his legendary years with Miles Davis he has gone on to perform and record with the finest players in the world. Stefon Harris is a young and distinguished vibraphone player who has taken on the mantle of Bobby Hutcherson and Lionel Hampton. His Blue Note recordings have been met with both critical and commercial success. Lewis Nash is now recognized not just as a stellar sideman much requested for recording sessions but as a leader in his own right.

...they overcome the MJQ comparisons by pushing the nuanced aggression that makes each member so singular... the CJQ has succeeded in making this a solid and enjoyable CD...
- Downbeat (USA)

...similar to the late, lamented Modern Jazz Quartet (or MJQ). The instrumentation is the same, and the CJQ is almost as stellar. Their music is elegant and polished in the MJQ manner. If you didn't know it was classical, you'd think it was just admirably cool and melodic jazz.
- Daily Telegraph (UK)

Album of the week...this CD is a wonder. Inspiration by the late-lamented Modern Jazz Quartet, this band, which comprises Kenny Barron, Ron Carter, Stefon Harris and Lewis Nash, has the chops to take on classical music and the swinging ability to make it sound like newly minted top-quality modern jazz. The good news is that there's more to come.
- The Independent (UK)

...the idiom is cool and timeless... such elegance that you can't help being charmed.
- John L. Walters, The Guardian (UK)