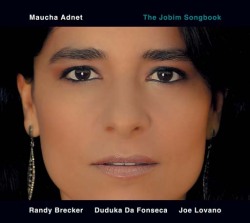 13 interpretations of the works of Antonio Carlos Jobim by Maucha Adnet who is in a better position than most to do them the justice they deserve having toured for ten years with Jobim. She has also assembled an all star line up to help her out including Joe Lovano, Randy Brecker and the amazing Trio de Paz. Maucha has a gorgeous rich voice which suits these songs and this music so perfectly, sink yourself into 'Águas de Março' for instance and melt. Divine.
- World of Reviews

“Maucha and I have travelled the world with the Banda Nova. She is a marvellous singer. Her voice is deep, rich and mysterious. It makes me long for the Brazilian forest. She is a great artist.”
- Antonio Carlos Jobim

Maucha Adnet began her professional career in Rio de Janeiro with the vocal group “Céu da Boca”, before going on to tour the world for ten years with the legendary composer and performer, Antonio Carlos Jobim, with whom she made many important recordings including the Grammy- winning “Antonio Brasileiro”. She has performed or recorded with such artists as Charlie Byrd, Dori Caymmi, Eliane Elias, Wynton Marsalis and Caetano Veloso.

...a very classy production indeed... just the thing to get you into the summer...
- Hi-Fi News (UK)

...here she is joined by a stellar cast to deliver a sensitive and dynamic collection of some of his most celebrated songs. Adnet's voice is hauntingly reminiscent of Brazil's beloved Elis Regina... this well-recorded and mixed album stands as one of the more beautiful tributes to Jobim and his music; it is pretty, refreshingly honest and makes you yearn for more
- JazzTimes (US)