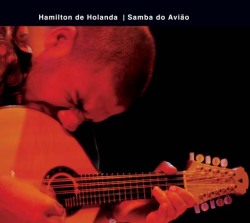 Hamilton de Holanda is the world's finest player of the jazz mandolin. And not only that. In 2001 he was unanimously voted "Best Instrumentalist in Brazil".

Richard Galliano (who specially composed two pieces for this recording) is the world's finest accordion player.

Hamilton de Holanda is a master of "Choro" - traditional Brazilian street music with strong links to jazz, tango and African rhythms - which originated in Rio around 1850. He performed on the Grammy-Award winning album by Cesària Evora and now tours the world with his own Trio and Quarteto but also often appearing with Richard Galliano in a duo.

This is a record of pure crystalline beauty whose natural flow recalls the "rodas de choro" - gatherings of musicians who play their instruments as if they were talking to each other. This is the music of subtle alchemy where the timbre reminds one of other important composers- such as Astor Piazzolla and Egberto Gismonti who spoke the language of jazz and improvisation while still infusing it with traditional phrasing and rhythm.

...a slice of Brazilian genius...weaving an intricate spell...sounds like several musicians, all of them virtuosos on the instrument...a phenomenal performance.
- Fly.co.uk

Hamilton de Holanda is undeniably the best and brightest modern mandolinist in Brazilian music . His stunning technique and adventurous attitude are front and center as his virtuosity is put at the service of a selection of choro jazz selections played solo. Although the highlights of the session may be a couple of Antonio Carlos Jobim tunes – including the sublime title track and a radiant rendition of Morricone’s “Cinema Paradiso theme, de Holanda’s often overlooked compositional abilities are also expressed with five original songs. De Holanda is joined by his occasional live duet partner, accordionist Richard Galliano on the final three tracks. The warm texture and expressive nature of Galliano’s accordion work is the perfect complement to the mandolinist’s ringing notes and evocative phrasing.
- Michael Point for Downbeat Magazine

...rapid-fire precision and exquisite soloing are riveting... mesmerizing treatment of Jobim classics as well as his own soulful and sophisticated compositions
- JazzTimes (US)