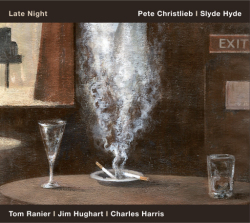 You’ve heard Slyde in concert behind performers like Frank Sinatra, Jaco Pastorious and Count Basie. You’ve heard him on such shows as the Academy Awards, Home Improvement, Cheers and The Tonight Show and in such films as “Back To The Future”, “Ghostbusters”, “Caddyshack”, “Godfather III” and “The Abyss”. If you’ve heard Neil Diamond’s recording of “Cracklin’ Rosie”, that’s Slyde on the horn opening the song. He’s also on albums by Madonna, Celine Dion, Barbra Streisand, Michael Jackson, The Rolling Stones, Prince, Herbie Hancock, and Quincy Jones. He’s not even eligible for NARAS awards as the best brass player anymore (NARAS is the organization whose members vote on the GRAMMY’s) because NARAS had to make him an MVP Emeritus to their Hall of Fame to make way for other horn players. Previously, Slyde had won Best of… in the Double Brass, Trombone, and Tuba Player categories.

Slyde’s colleagues on this album all have similar backgrounds at the top of the musical profession. Tenor Pete Christlieb is rightly known as one of the greatest tenor saxophonists in the world. Steely Dan has fashioned many of their finest musical moments around Pete’s’s talents. Pianist Tom Ranier, drummer Chizz Harris and bassist Jim Hughart are also studio stars in their own right. Their consistently elegant, subtle musicmaking is the kind that makes a great soundtrack for a romantic evening, yet rewards close listening with its many enchantments.

Created early in their partnership, 1945’s “It Might As Well Be Spring” is one of Rodgers and Hammerstein’s best ballads, perfectly capturing the poignant yearning for a green season of the heart. Slyde requested a third take because he wanted to be perfectly happy with the continuity of his line. His dramatic punctuation of the melody, with its extra-vocal quality, demonstrates his appreciation of the lyrics. This is yet another virtue of many of the finest jazz musicians. They often study the lyrics of standard tunes to inform and enrich their instrumental interpretations of them.

Michel Legrand’s “What Are You Doing The Rest Of Your Life” introduces you to Slyde’s burnished, lustrous sound on the baritone euphonium, a cross between the double brass and trombones Slyde plays. You also hear Chizz’s elegant brushwork along with the other members of the rhythm section.

One of the many special aspects of this group’s playing is their mastery of slow swing. It sounds so easy, yet, as any musician can attest, it’s not. Capturing that pulse, that magic element known as swing, lies at the heart of jazz at any tempo. On track after track here, the playing sounds effortless and airborne. It also sounds intimate, like a warm conversation among long-time friends on which we’d be eavesdropping if we weren’t listening with their permission.

The worldliness and mocking exhaustion of Rodgers and Hart’s “Bewitched, Bothered and Bewildered” was made for Slyde and company’s smooth moves. Their conception is bewitching. “Bewitched…” showcases a big reason why Pete is such a studio favorite. Most saxophonists focus on their tone instead of their range on their instrument, especially in jazz. Stan Getz’s tone, Ben Webster’s tone, Coleman Hawkins’s tone immediately identify tenor masters to all but the most casual listener. To be sure, Pete has a master quality tone. But it’s his range over his horn that characterizes his playing. He can go anywhere with it. From the shyest, breathiest whisper to a chrome-plated shout, Pete meets each musical moment with utter authority.

On the rideout, you should enjoy how Pete echoes Slyde to such superb effect.

In “But Beautiful”, Slyde’s wordless, rich baritone is even more saturated with romance than the baritone who introduced it in a movie… Bing Crosby. Slyde and Pete’s phenomenally well-disciplined use of vibrato adds even more intensity of expression to their instrumental voices. Just for fun, see if you recognize the two melodies Pete quotes at the end of his solo.*

“Angel Eyes” by Matt Dennis is a great song dominated by a great interpretation-Frank Sinatra’s on 1957’s Only The Lonely. Slyde plays straight to the midnight mood of the haunted Sinatra treatment. It’s impossible to imagine any horn sounding more technically seamless and just plain beautiful than Slyde’s on this track.

Why incredible? Because it’s such a gorgeous song under any circumstance. Because it’s an unusually complex, through-composed melody for so popular a song. And because of the shocking fact that Strayhorn was only 17 when he showed up with “Lush Life” to audition for Duke Ellington. In an instance of one genius instantly recognizing another, Duke took the precocious young man under his arm as his close collaborator and alter ego for the rest of Strayhorn’s life. Incidentally, we want you to know, even though it’s an intonational minefield, there was no arrangement and virtually no huddle prior to recording “Lush Life”.

Pete’s sumptuous saxophone enfolds the Gershwins’ “Someone To Watch Over Me” in a passionate, sensual embrace. Jazz musicians love to play George Gershwin songs. His chord sequences are particularly friendly to improvisation.

Pete also uses interpolation, the jazz art of inserting quotes from other songs, in his playing. He chose the opening notes from Gene Kelly’s immortal version of “Singin’ In The Rain” because something in “Someone…” prompted him to recall when he was the only boy in a tap-dance class. I don’t know how much Pete’s tap-dancing impressed the girls in his class, but I can tell you that the rhapsodic expression his playing inspired on the faces of the women in the recording booth is one you seldom see in public and not often enough in private… dammit.

By the way, please don’t think there isn’t as much to say about this group’s renditions of “The Very Thought Of You”, “I Got It Bad And That Ain’t Good” and “When I Fall In Love”. On the contrary, each track shares the abundant virtues of the overall album. Tom Ranier’s exquisite piano traceries should scarcely be overlooked any more than Jim Hughart’s tasteful, discreet bass work.