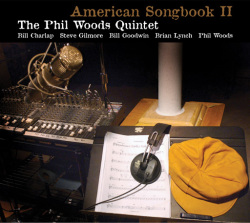 The chemistry of this potent quintet is apparent from jump on the uptempo opener, a burning rendition of Jimmy Van Heusen's "Suddenly It's Spring" which features Woods' urgent bop-fueled lines and Lynch's glistening trumpet work. A relaxed, midtempo reading of the '40s big band chestnut "Careless" features muted trumpet and shimmering horn interplay on the front line. Pianist Charlap adds an elegant touch to the proceedings which are imbued with a jaunty feel and a bluesy undercurrent. On Harold Arlen's poignant "Last Night When We Were Young," Woods plays a stirring solo intro before settling into the lush ballad with a remarkable depth of feeling.

Lynch's modernist arrangement of "I'll Remember You" is marked by intriguing reharmonizations and highlighted by Woods' liberated blowing on the swing section. On a gently swing 3/4 time rendition of "I'll Take Romance," Woods nimbly drops in a quote from "Body And Soul" while pianist Charlap tosses in a reference to "Holiday for Strings." Lynch's brilliant lyricism is showcased on a beautiful rendition of the lush Rodgers & Hart vehicle "Bewitched, Bothered and Bewildered," while on the haunting minor key lament "Yesterdays," his mentor Woods displays an uncanny vocal quality on his solo, coyly dropping in a quote from the Beatles' "Yesterday" along the way. Charlap adds rhapsodic voicings on this oft-recorded Jerome Kern chestnut, tossing in a quote from "Nature Boy" on his solo. On a midtempo shuffle-swing rendition of "Come Rain Or Come Shine," Woods digs in with earthy abandon on his solo while nimbly quoting from Tadd Dameron's bop anthem "Hot House." "Watch What Happens" opens with a marvelous muted trumpet-piano duet by Lynch and Charlap while Lynch's reinventon of Cole Porter's "Night and Day" cleverly incorporates a reference to "Take The A Train" in the fabric of the arrangement. Woods affects a singing quality on his alto, flowing organically and effortlessly over the barline with old school bop aplomb.

Born on November 2, 1931 in Springfield, Massachusetts, Woods came up during the bebop era under the sway of alto sax titan Charlie Parker before developing his own sound by the mid 1950s. A student of Lennie Tristano, his early career included stints with Benny Carter, Charlie Barnet, Buddy Rich and the Dizzy Gillespie Orchestra. Woods has led his own boppish groups since 1955 and in 1968 moved to France, where he worked for three years with the adventurous European Rhythm Machine. After returning to the United States in 1972, he formed a quintet that included bassist Steve Gilmore and drummer Bill Goodwin, who remained his rhythm tandem of choice through the '70s, '80s and '90s and also appear on Woods' American Songbook II.