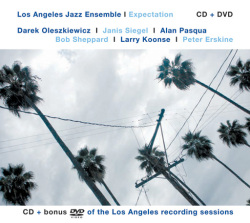 Assembled by bassist-arranger Darek "Oles" Oleszkiewicz, a native of Poland and in-demand West Coast session player, The Los Angeles Jazz Ensemble is an all-star quintet featuring Darek's West Coast colleagues Bob Sheppard on saxophones, Alan Pasqua on Hammond B-3 organ, Larry Koonse on guitar and Peter Erskine on drums. As Oles writes in the liner notes to Expectation: "It is such a great feeling playing with this group, comparable to driving a luxurious, vintage Cadillac, with all its comfort, power and flamboyance."

The quintet opens on an energized note with a freewheeling rendition of Miles Davis' "All Blues," underscored by Erskine's brisk swing factor. Sheppard provides some soaring soprano sax work here and the band drops out to showcase a dramatic, deep-toned bass solo by Oles before the ensemble returns to burn underneath a fleet-fingered Koonse solo. Oleszkiewicz's moody, reharmonized rendition of the Rodgers & Hart's gem "I Didn't Know What Time It Was" includes some spirited call-and-response between Sheppard's tenor and Siegel's daring, wordless vocals. Siegel conveys a sense of longing on a tender, sambified version of Irving Berlin's "I Got Lost In His Arms" and also delivers a passionate reading of Tadd Dameron's haunting ballad "Whatever Possessed Me."

A loping 5/4 rendition of Golson's "Along Came Betty" provides a buoyant vehicle for Koonse's inventive, warm-toned guitar lines. Erskine also opens up here, showcasing his melodic penchant and remarkable facility on the kit. Pasqua's velvety smooth B-3 organ lends a unique texture to Bill Evans's introspective "Blue in Green," which is underscored by Erskine's sensitive brushwork and Oleszkiewicz's near subliminal bass pulse. Darek's somber title track is marked by soaring unison lines between Sheppard's tenor and Siegel's ethereal wordless vocals. Elsewhere, Sheppard and Koonse exchange angular lines on soprano sax and guitar on a playful interpretation of Monk's engaging "San Francisco Holiday," then Erskine affects a catchy Papa Jo Jones hi hat beat on the intro to Jerome Kern's "Why Do I Love You," which develops into a carefree swinger paced by Oles and Erskine. Pasqua's hip organ comping here underscores the flowing six-string facility of the underrated Koonse and he adds some B-3 burn of his own at the tag. Oles handles the touching melody on Harrell's bittersweet "Sail Away" while Pasqua demonstrates a seasoned touch on the poignant "I'll Be Seeing You," which is ably supported by Erskine's deft brushwork, Koonse's delicate guitar and Oles' spare, expressive bass lines. With Oleszkiewicz at the helm, this stellar crew of West Coast heavyweights strikes a dynamic accord on Expectation, the auspicious debut by the Los Angeles Jazz Ensemble.