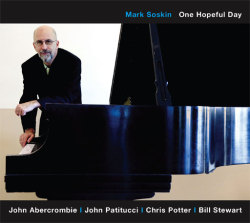 With One Hopeful Day, it becomes abundantly clear that pianist Mark Soskin has learned one primary lesson from his many sideman gigs: how to stock your ensemble with the best and the brightest. His quartet on this album includes Chris Potter, recognized as possibly the leading saxophonist of his generation through his own records and his work with Dave Douglas, Dave Holland, Steely Dan, and Paul Motian; bassist John Patitucci, whose thick, rubbery sound may be one of the only that can stand up to Soskin’s jabbing left hand, and has also buoyed the likes of B.B. King, Chick Corea, Herbie Hancock, Wayne Shorter, and Stan Getz; and the remarkably intuitive Bill Stewart, longtime drummer for John Scofield, who has also worked with Maceo Parker, Joe Lovano, and Dave Holland.

One Hopeful Day begins and ends with Soskin’s delicate, emotional solo piano. The album kicks off with a brief, hushed introduction which suddenly takes off at a gallop as Stewart begins a skittering rhythm over which Potter blows a sauntering “On the Street Where You Live,” the first of Soskin’s radical rearrangements of well-known melodies. Even more drastically reimagined is Thelonious Monk’s “Bemsha Swing,” taken at a jittering, stop-start pace, with an interlude newly composed by the leader.

Soskin also offers an urgent take on Chick Corea’s “Innerspace,” which he first encountered as a sideman on a 1995 date with vibraphonist Joe Locke and has since wanted to revisit; the Rodgers and Hart standard “It’s Easy to Remember,” rendered with a warm embrace, both forceful and soothing; and an upbeat “End of a Love Affair,” the Edward C. Redding composition best known for vocal renditions by Billie Holiday, Frank Sinatra, and Julie London.

The quartet is joined on two of the three Soskin originals by fellow Berklee grad John Abercrombie, whose wiry guitar runs a footrace with Potter’s tenor on “Step Lively” and reaches skyward with his soprano on “Strive.” The final new number is the title tune, a wistful ballad that vividly showcases Soskin’s emotional side.

The CD closes with Soskin alone on Clare Fisher’s “Pensativa,” where the pianist’s influences congeal, part conservatory and part nightclub, swinging and cerebral. It’s the perfect close to an album that leaves listeners hoping that Soskin will take charge more often in the future.

One Hopeful Day indicates the relative dearth of recordings with Soskin as a leader is not due to any lack of leadership abilities. Though he cedes generous amounts of spotlight to the other members of his quartet, Soskin is always in control, navigating the pathways along his six surprising reinventions of jazz standards and three powerful originals.

...soskin's touch is authoritative, crisp and relentlessly creative... enjoyable on many levels, keep an eye out for it
- All That Jazz (USA)

...a full-on, force-8 gale and it will rattle cages... thoughtful arrangements and joyous, two-fisted playing are the key to the album's success
- All About Jazz (UK)