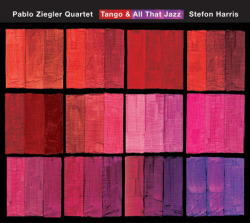 The title is ironic but underscores the simple truth that the essential elements of both tango and jazz are “passion and swing”. It is natural therefore that tango “meet” jazz. Pablo Ziegler is one of the top jazz pianists in the world, recognized for his experimental work with “nuevo tango”, which culminated in his winning a Latin Grammy Award.
He performed with the Astor Piazzola Quintet for eleven years, touring the world and making many acclaimed albums. After Piazzolla’s passing, Pablo formed his own quartet and went on to record for Sony and BMG Classics. During that time he also played with many fine jazz musicians such as Joe Lovano , Paquito D’Rivera and Gary Burton. Ettore Stratta and Pat Philips – the producers of this album – met Pablo at a session in Buenos Aires where Stratta was recording “Symphonic Tango” with The Royal Philharmonic Orchestra.
Later they decided to place Pablo at the centre of a TangoJazz project – "Tango Meets Jazz" - putting on concerts where the Quartet could play with America’s top jazz musicians. Musicians such as Stefon Harris one of the US’s finest vibraphone players and a founding member of The Classical Jazz Quartet. That concert in New York was recorded for Kind of Blue. A unique evening of passion, fire and…swing.

...this disc has the heart of a dancer with a rose in his teeth... swaying rhythms and hypnotic melodies delivered hot and steaming...
- All That Jazz (USA)

...wins you over with swing, sass and energy.
- Songlines (UK)

...all in all a very enjoyable album and one of the most convicing fusions of jazz and tango that I've heard
- 24dash.com (UK)

...the album is a seamless blend of two traditions, full of finesse and feeling
- Financial Times (UK)