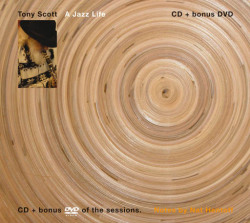 Tony Scott is one of the most vivid and continually creative originals I’ve known, as he reverberatingly shows throughout this new recording Tony also exemplifies the wisdom of Wynton Marsalis: “We don’t believe in segregating our music by eras.” His career was and is multidimensional. He played with Claude Thornhill, Tommy Dorsey and Duke Ellington, as well as on a wide range of recording sessions including dates with Billie Holiday, who admired his playing. As Richard Cook points out in the Penguin Encyclopedia of Jazz, Tony “mixed cool and hot approaches without any fuss or awkwardness, and the best of his records…are very fine. (On this record) he convincingly speaks the language of deep and low-down blues…with a capacity for deeply flowing lyricism…and unabashed romanticism.

A quintessential recording of timeless originality.

...in a series of extraordinary solos, Scott is always unique and original, instantly identifiable for his imaginative textures and harmonic adventurousness
- Vortex Online (UK)

"this is a lovely way to say goodbye"
- Jazzwise (UK)

eccentric and charming, it encapsulates his long jazz career and lifelong love of the music...CD of the week
- Evening Standard (UK)

anything by this ovelooked giant of the clarinet is worth searching for, and this one shows that Scott went out on a high note
- All That Jazz (USA)

...his enthusiasm counters any melancholy that might come with such a valedictory work
- Downbeat (USA)

...a fitting epitaph for a truly original musician
- 24dash.com (UK)

...so much feeling in these renditions of the most lovesome tunes in jazz... that the effect is extremely moving...
- Manchester Evening News (UK)