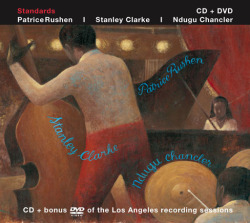 This session was originally released on the short-lived Vertical Jazz label. It has now been re-mastered for Kind of Blue Records. Released for the very first time is a 30’ bonus DVD of the recording sessions with interviews and four complete tracks.

Stanley Clarke needs little introduction. After working with Dexter Gordon, Gil Evans, Pharoah Sanders and Stan Getz his career took off when he formed the legendary Return to Forever band with Chick Corea. His mastery of the acoustic bass was immediately recognized by critics and fans alike but not satisfied with the possibilities of the instrument in the rock/fusion sphere he created two new ones: the piccolo bass and the tenor bass - more suited to the world of electric jazz experimentation. In this session Stanley returns to the acoustic bass for the first time on record for over twenty years.

Patrice Rushen is a multi-Grammy-nominated artist. A classically trained pianist and talented composer she had a run of R & B hit albums in the 80s. She has scored many important films such ‘Men in Black’ and ‘Waiting to Exhale’ and her music has been sampled by artists as George Michael, R.Kelly, Mary J.Blige and Shabba Ranks.

Leon ‘Ndugu’ Chancler has performed with Herbie Hancock, Freddie Hubbard and Miles Davis and recorded with George Duke, Weather Report, Lionel Richie, Thelonious Monk, The Crusaders, Hubert Laws and Frank Sinatra among others. He is also Assistant Professor of Jazz Studies at the University of Southern California.