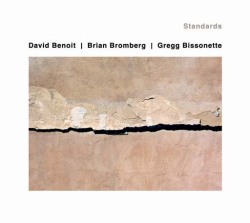 This session was originally released on the short-lived Vertical Jazz label. It has now been re-mastered for Kind of Blue Records from the original tapes.

David Benoit is a five time Grammy nominee - exploring not just jazz but also classical music. He has perfomed with world class major orchestras under the direction of such conductors as Leonard Bernstein and Kent Nagano. His career as a contemporary jazz pianist began in 1977 and includes 23 solo recordings. He was voted Keyboardist of the Year in 2000 and 2001 by the Oasis Smooth Jazz Awards. He is also a very talented composer and arranger.

Brian Bromberg has been described by Lionel Hampton as “the greatest bass player in the world”. He got his start in jazz by playing with the Stan Getz quintet. Since then he has performed with Bill Evans, Billy Cobham, Elvin Jones, Elvis Costello, Herbie Hancock, Gerry Mulligan, Roy Hargrove, Diane Schuur, Diana Krall, Michael Bublé… the list goes on forever. His solo bass albums Wood I and Wood II were extremely well received.

Gregg Bissonette is an amazing drummer – at home with both jazz and rock. He started out with Maynard Ferguson, Buddy Rich and Tania Maria but went on to record and perform with David Lee Roth, Joe Satriani, Don Henley, Santana and Ringo Starr.

...on this album David Benoit exercises his considerable straightahead-jazz chops... with crisp support from bassist Brian Bromberg and drummer Gregg Bissonnette, Benoit proves himself a lively interpreter of standards... intensely melodic but putting just enough wrinkles into his material to sustain interest throughout... shows another side to the pianist...
- Vortex Online (UK)