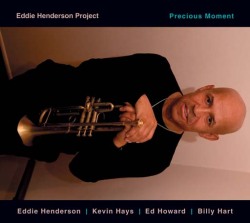 Eddie Henderson has a sublime tone whether he is playing trumpet or flugelhorn. He plays with a beautiful simplicity that is both emotional and spiritual- raw yet delicate.

Born in New York City he moved to the Bay Area as a kid taking up the trumpet at the age of 10. He studied music theory at 14 at the San Francisco Conservatory before completing medicine at Berkeley. It was Miles Davis that convinced Eddie to become a professional jazz musician and after gigs with Miles and John Handy, Eddie joined the legendary Herbie Hancock Sextet (who recorded also as the Mwandishi Band) in 1968. This highly experimental (yet successful) band delved deeply into fusion and free for three years. Eddie continued in the fusion style during the seventies making albums for Capricorn and Blue Note even joining Art Blakey’s band for a while. He jammed around the Bay Area with great musicians such as Joe Henderson and Pharoah Sanders but it was not until the early nineties when he moved back to New York that his career took off again with a series of brilliant albums for SteepleChase and Milestone. Although it is often said that Eddie’s style is reminiscent of Woody Shaw or Sonny Rollins, his distinctive elegance is very personal indeed. His choice of repertoire is always challenging and never obvious - Eddie Henderson is one of the great trumpet players of the world!

Kevin Hays has performed and recorded with Sonny Rollins, John Scofield, Joshua Redman, Freddie Hubbard and Roy Haynes. He has recorded 8 Cds as a leader including three critically acclaimed albums for Blue Note. His trio recording of Andalucia with Ron Carter and Jack DeJohnette won a Downbeat 4 stars award.

Originally, the title of this CD was supposed to be “Around the world in 3/4”, since the majority of the tunes were in 3/4. Then I realized that each song was a “Precious moment” in time. Therefore, the title was changed to “Precious Moment.” Noteworthy is the fact that both of these tunes were composed by my talented wife, Natsuko, who is so precious to me.

Precious Moment is easily recommended to fans of post-bop.

...a well-titled, poised and gorgeous ballads set
- All About Jazz (UK)

...this is an honest and superbly played set that truly is packed with precious moments. The warm, full-bodied recording does it full justice too.
- Hi-Fi (UK)