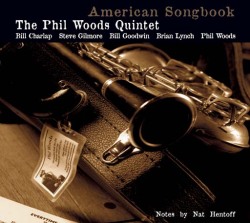 In writing about Phil Woods for my column in Jazz Times, the headline I chose was:
“Phil Woods: The Irrepressible Spirit of Jazz.”
I likened Phil’s passionate improvising to that of Roy Eldridge, because “like Roy, he never coasts.” I’ve heard Phil in diverse settings, and no matter the size or composition of the audience, Phil plays, like Roy, as if it’s the last chorus he’ll ever take.

As a composer and an arranger, moreover, Phil is also unpredictably imaginative. Years ago, for Candid Records, I recorded an extended work of his, “The Rites of Swing.” It revealed the quality of naturally flowing invention that you can hear in this set in his unexpected, subtly intriguing arrangements of, among other tracks, “All The Things You Are”, “I’ve Got The World On A String”, and a luminous recreation of “Summertime” that makes me want to hear much more of his scoring of classic standards - and of originals.
For Phil, this set represents, as he puts it, “coming back to the great American songbook. I’ve been training for it my whole life. Many of my other albums have focused on obscure pieces by Duke Ellington and Oliver Nelson, my originals and blowing sessions. But I’ve never before done a recording just of songs in settings like these.”

In an interview included in the third volume of “Dizzy in South America: Official State Department Tour, 1956” (Red Anchor), Phil was already talking enthusiastically about the classic American songbook. Often overlooked, he said, is the “Jewish-European harmonic contribution to jazz. But Jerome Kern, Irving Berlin and the rest of those composers fed the bebop soul. They weren’t all Jewish. Cole Porter, for example. And Dizzy collated all of that.” “Along with the rhythm, his mastery of rhythm, Dizzy absorbed and expanded the harmonic sophistication of that tradition. With him, you got the whole package.” It wasn’t only Dizzy, of course. “Where would Charlie Parker have been,” Phil said to me recently, “without Jerome Kern?”

As a connoisseur of the American songbook, Phil pays affectionate attention to the verses, as you’ll hear in these arrangements. I told him that Lester Young once told me that he never played ballads unless he had first learned the lyrics, including the verses. That way, as personally and distinctively as he transformed the ballads, he took care to respect the core intentions of the composer and lyricist. So too with Phil.

The performances here are also classic in terms of the collective personality of the quintet. Each of the players has ample space for soloing, but there is also a continual interplay between them that is the essence of jazz ensemble democracy. What makes this combo rare in jazz history is the celebratory fact that Phil, Bill Goodwin and Steve Gilmore have been together for some 29 years! And pianist Bill Charlap, whom I've heard fuse naturally into all kinds of jazz contents, fits easily and authoritatively here as well. Equally integral to the wholeness and the spirit of the quintet is trumpet player Brian Lynch, whose swinging credentials include stays with, among others, Horace Silver, Toshiko Akiyoshi, Jack McDuff and Art Blakey. He’s been with Phil since 1992.

In Ben Sidran’s valuable book “Talking Jazz” (Pomegranate), Phil Woods gets to the core of the emotional intensity that has always characterized his ensembles: “You’ve got to be a passionate player...That’s the great tradition of making music from the voice...Some of the cats, they forget the thrill they had the first time they sounded good.” And, Phil told Sidran, the passion has never left him: “I love to go to work...anything to do with music. I’m not too full of fire unless I’m involved with music. It's my hobby, my profession, it’s what I do. Except build model airplanes and watch football.”

In “The Penguin Guide to Jazz on CD- 5th Edition”, by the uncommonly perceptive Richard Cook and Brian Morton, they write that from the beginning of his jazz life, Phil “sounded like a mature player” and his music "has been deepened by persistence and a bottomless appetite for playing.” During the recorded interview while he was with Dizzy Gillespie's big band, Phil can be heard exuberantly distilling his life: “I’m so lucky to be a jazz musician!” One of my favorite Duke Ellington songs, too seldom played, is titled “What Am I Here For?”. Phil has always known the answer to that. And that’s why you’re hearing him in such an enlivening performance.

This acute pleasure in being able to say who you are - as you feel it at the moment - but based on all you’ve lived - is the very essence of the jazz experience when, individually and collectively, the players have found the groove. And it is that rare quality of fully realized creative identity that flows directly into the listener, thereby stirring his or her own memories and desires. That is the Phil Woods Experience - a title he might give his combo - across the spectrum of jazz, from hard, exultant swinging to intimate, lyrical romanticism. All of that is in this set.

...this album a model of its type, a perfect encapsulation of what the extraordinary new label Kind of Blue seems to be about: putting virtuosos in settings conducive to relaxed but utterly committed music-making. Recommended.
- The Vortex Online

...it's a classic of the genre
- The Observer Review (UK)

...recorded with an expert care appropriate to the musicianship...
- The Guardian (UK)

...this is an excellent record
- Corriere della Sera (Italy)

...clearly a winner...it may have taken quite a while for Woods to record a set of standards, but it was definitely worth the wait
- Terry Perkins, JazzTimes (US)

Awarded the prestigious German Music Critics Award for 3/2006
...this is a cracker of a collection
- The Jazz Rag (UK)