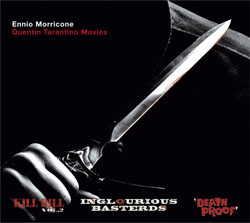 “To me movies and music go hand in hand. When I’m writing a script, one of the first things I do is find the music I’m going to play for the opening sequence.”

Quentin Tarantino’s favourite movies of all time are Sergio Leone’s “The Good, the Bad and the Ugly”(1966) and Howard Hawks’ “Rio Bravo” (1959).   Only seven years separate the two westerns and although they would superficially seem world’s apart they were stylistic masterpieces that changed the language of film forever. Tarantino has described “Rio Bravo” as a “hang-out movie” – a film where the interaction of the characters is almost more important than a linear story-line. This “continuum” effect was fine-tuned by Leone in “The  Good, the Bad and the Ugly”, where the Italian director created a “visual geometry” (as in the final triangular shoot-out scene) to echo the psychological battle being waged.

What Tarantino found attractive in Hawks was the innovative camerawork: the long shots, the lack of close-ups and the absence of dialogue. Silence was used to create tension as much the repetetive use of the same piece of music. Sound (and silence) became an integral part of a new film language on a par with the moving image. What the characters were not saying was as important as what they were saying. The soundtrack for “Rio Bravo” was composed by Dmitri Tiomkin and when Sergio Leone was discussing the music for “A Fistful of Dollars” (1964) with Morricone he asked the latter to write “Dimitri Tiomkin music”. Indeed the trumpet theme to the first of the “Dollars Trilogy” is similar to Tiomkin’s “El Deguello”.

“Going into a videostore and going though the videos, looking at every title they have, trying to find some old Spaghetti Western, that’s gone.”

Tarantino is known collector not just of films but also of soundtracks and where better to seek out the right music for his work but in the Italian and French B-movies of the 60’s and 70’s.

Little-known western and horror films of that era have proven a valuable source of material.

As can be seen by the original films listed alongside the cuts used by Tarantino, this is something more than a form of affectionate archeology. It is never nostalgic tokenism or even an “ironic” cameo because the music is always “realer than real” – it really “works” with the images on screen.

“I don’t believe in putting in music as a band aid to get you over rough parts or bad film-making. If it’s there it’s got to add to it or take it to another level.”

Over three hundred Spaghetti Westerns were made between 1963 and 1972. The best of these were made by Italian directors such as Sergio Corbucci, Duccio Tessari, Tonino Valeri and Sergio Leone. The music was composed by Gianni Ferrio, Armando Trovaioli, Luis Bacalov,

Carlo Rustichelli and Ennio Morricone. The films were often a curious stylistic mix of panoramic shots designed to create a sense of wide-open space, paranoia and ultimate loneliness juxtaposed with an almost video-clip feel when scenes were edited to fit the music (and not the other way round). The “heroes” of these films bore names such as “Ringo”, “Gringo”, “Django”,“Sartana” – almost “comic-strip” characters – echoed in Tarantino’s unlikely “Vincent Vega”, “Honey Bunny” and “Captain Peachfuzz”. Morricone’s music is essentially “comic.strip” in that it is entirely functional to the characters in the film and yet is “larger than life”. The sharp contrast between the “big sky” lush orchestration typical of the American western and the sparse, tense emptiness of the whip, the whistling, the wind and the rattlesnake – all sounds employed by Morricone that leave the audience with no illusion of a possibile happy end (with the hero riding off into the sunset). Rather he’s going to get a bullet (or even better two or three) through his head. A perfect choice for Quentin Tarantino therefore! Tarantino loves slowing the main action down (even introducing a retrospect or a visual quote from an earlier film). This is doubly effective when underlined by music (as exemplified by the use of the carillon by Leone and Morricone) and perfected by Tarantino.

Quentin Tarantino has often been accused of being style without substance – an accusation also levelled at Ennio Morricone. But it is now abundantly clear that they have both prepared their place in cinema history and that both are more than just cult figures with comparative mythologies. It is impossibile to think of a piece of Ennio Morricone’s music without thinking of film and it is impossibile to think of Quentin Tarantino movies without their soundtracks.