Mark Soskin - Man Behind The Curtain 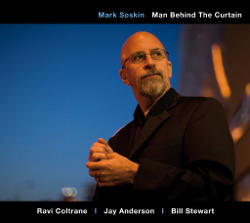 My second CD for the Kind of Blue label and tenth as a leader is a further exploration of the quartet setting, sort of a followup to the one prior. I'm continuously searching for new ways in which to create interest and get various textures out of the small group.

It certainly helps to have players involved who have their own strong identities and ones who will take the music beyond what is written. With that said, I think that Ravi Coltrane, Bill Stewart and Jay Anderson have helped me to achieve my goal.

Bill Stewart played on my last CD for Kind of Blue, "One Hopeful Day" and I loved all the nuances that he brought to the music then as he does on this one. I don't have to convey much to him about conception as he is one of the most intuitive players around today.

Jay Anderson and I have been making music in a variety of settings for many years now. We recorded together on a previous release of mine ,"17". Besides having a broad knowledge of the bass and getting a big, warm sound, he's a total team player and always there to make everything flow. Incidentally, we were hired on the same day and still both continue to teach at The Manhattan School Of Music in New York City.

The only prior playing experience I had logged with Ravi Coltrane was on a co-led recording that I made some years back with Chip Jackson and Danny Gottlieb. Before the current session I had gone to hear Ravi with his group to get an idea of what he was into nowadays. What I heard that night was an individual voice that I thought could bring something special to this project. I really appreciate how Ravi had handled my music with the utmost sincerity and this feeling permeates throughout the recording.
The music here is made up of some favorite melodies of mine by various composers and three original compositions.

"Heather On The Hill", the opener from the play, "Brigadoon" has always stood out as a very strong tune and I begin this with the verse as a sax/piano duet. This is one of the more rearranged pieces. In many of my compositions I try to stress melodic content. I feel that "Chutes and Ladders" follows in this tradition. The rhythmic feel for "Invitation" has at its anchor a bass line which I double with Jay. I changed the meter to 3/4 and then altered the phrasing of the melody. The inspiration for the arrangement came from a favorite composer of mine, Milton Nascimiento. This is the first time on one of my recordings where I included a rubato or "free" ballad. One of the more well known standards here, "For All We Know" is given this treatment. I think it's a nice change of pace. The title track, "Man Behind The Curtain" has a slightly dark and moody sound and leaves breadth for a lot of group interplay. One of the lesser traveled gems I decided to include is Kurt Weill's "This Is New". Again I used the verse as an intro. This is the first tune we recorded and I felt an appropriate one to open up and have fun with. I've been performing "For Heaven's Sake" for years but have never recorded it. This is the only tune for which I heard overdubbing another horn. I wrote a tenor sax counter-line to the melody played on soprano sax. Finally, things wind down naturally with my other original, "Little One" in which the meter changes for a few bars. This was just the way it came out in the writing process. The finale in a session filled with pleasant surprises that went quite smoothly from start to finish.

"Pianist-leader Mark Soskin trades the swirling harmonies, linear forms and swishy rhythms of the modern mainstream. Here, drummer Bill Stewart orchestrates the effortless grooves, and high-quality sound captures every nuance. The three Soskin originals are well-crafted - 'Invitation' a sparky waltz; 'For all We Know' a spiritual ballad; the lesser known 'Heather on the Hill' alternating riffs and swing. Ravi Coltrane's saxophone lead makes the most of rich harmonies and clear signposts."

"Odds are that listeners who've enjoyed pianist Mark Soskin's extensive work
with Sonny Rollins or his own recent quartet recording "One Hopeful Day"
Will be delighted with "Man Behind the Curtain...an album that invites and
rewards repeated listenings."