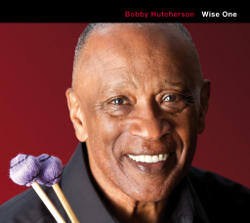 John Coltrane, the man and his music, has long been a profound influence on the artistic path treaded by Bobby Hutcherson - almost from the very beginning of the great vibraphonist’s impressive career.  Hutcherson remembers penciling on a fake moustache as an underaged teenager in his native Los Angeles so as to gain entrance to first hear the iconic saxophonist play in a local jam session preceding an engagement with the Miles Davis Quintet.  “I got there early and he was in the back practicing and I was the only one sitting out there in front. That was great because nobody was there and I got to hear him practice. He practiced all the way up to the time that they played for the jam session.  I never heard anybody practice like that …”

“He was playing “Giant Steps” and all those things then and I was wondering, ‘What the heck is he doing,’ because you know he really had it together.  At that point he was studying out of the Nicholas Slonimsky book, the Thesaurus of Melodic Scales and Patterns which has all of those progressions in it. Trane was playing a lot of that and he was telling a lot of people about getting the book and checking it out, you know.”  The experience was life changing for the young vibraphonist. “At first I was playing and I wanted to be like Milt Jackson, who of course you know is great,” he acknowledges. “And Lionel Hampton. But Trane’s thing …it was a thing of humility and love … He was a very sweet wonderful person, just like a lamb.  He’d always be there for you, to answer your questions.” …

The example of that experience hit home with even greater force when Hutcherson heard the great saxophonist leading his own band years later.  “I went to the Jazz Workshop here in San Francisco,” he recalls. “He was playing and it was weird – there were only a few people there and he was up on the bandstand playing, him McCoy and Elvin and Jimmy, and Trane was playing and crying and it was quite a thing to see. After the set was over, you couldn’t clap because it would be sacrilegious. Trane was at the point where he was showing that the bandstand was an altar and it was a way of praying.  I had never witnessed anything like that. It made me realize that you don’t play just to try to get a hit or become famous.  It’s all about a spiritual religious situation where whatever passion in playing overtakes you and it becomes an offering. At that point then you’re just hoping to be used and have the notes come through giving the message to yourself and back to God and all the people that are around there to listen.  It’s all about being part of the Universe, just as small as a grain of sand and just as important as the sun coming up every morning and setting in the evening.”

Hutcherson’s philosophy of being part of a greater whole extends to his view of the value of the other contributors to this date.  Of his longtime friend and frequent drummer Eddie Marshall he says, “Well Eddie, we’ve been together, we’ve played together for years; since I met him back in the sixties. He’s one of those guys who it’s just wonderful to have - his attitude, his feeling.  He loves to play, he loves to call you up after the gig and tell you how much he enjoyed it.  He plays very well with my instrument because he can play forceful and at the same time still make it so that you can hear me play if I’m playing quietly.  He understands.”

Pianist Joe Gilman, a respected educator at the Dave Brubeck Institute at the University of the Pacific, is only beginning to receive the international recognition his talent merits.  “Eddie brought Joe to my attention,” Hutcherson recalls.  “He and I had played together a long time ago before and I had forgot all about it.  He’s one of those persons who is really close to his family and that’s important because he’s going to bring the closeness of the family situation to the bandstand to make everybody feel like family.”  The vibist continues, “He’s unbelievably talented!  As soon as I write something down, he completely understands.  He understands the chords that are contained within the scale … of the possibilities depending on the way the melody is. On how to approach it and at the same time give me space.  And how to drop a color out there and fill it in the canvas and let it drip down the canvas and then say you want to play some.”

Of bassist Glenn Richman, Hutcherson says, “He’s another person that Eddie Marshall turned me on to. He’s real strong person.  If something was about to go terribly wrong, you’d want him standing next to you.  He’s always there to help.  He’s another in that family type situation and that’s why I enjoy playing with him.  When you see that family thing it, all of a sudden it’s so much easier to play.  I mean because it’s a team.  It’s the teamwork that’s just wonderful.  Like if you ever go to a boxing match and you don’t realize that the referee’s also in the ring with the two fighters.  That’s because he’s really doing a great job; he’s going about his business and it’s making everything really easy.  It helps make everything so simple and that’s why I like him.”  Richman, like Gilman is vastly underappreciated outside of his West Coast environs.  This date should help bring wider attention to his superb playing.

Guitarist Anthony Wilson is practically family to Hutcherson. He says, “I’ve known the great Gerald Wilson, Anthony’s father all my life.…..my sister sang with his big band back in 1958. Anthony was like a little kid when I first met him.  I didn’t really realize that he had grown up into such a guitarist.  Gerald had called me up and asked me to play at his 90th birthday party at the Hollywood Bowl and I went into the musicians union where they were having a rehearsal and Anthony was in there playing with the big band.  They had the vibes set up next to him and so he started playing this one song and Gerald said, ‘Anthony, take a solo on this one,’ and he started playing and I said, ‘Oh my gosh. Oh wow, I remember feeling like that.’  So I said I’ve got to find this young man and ask him will he come and play.  Especially since you know I was such good friends with his dad and he was such an important part of my life, I knew it would be good to have him there and it was. It was wonderful.”

The music on this date is Hutcherson’s “offering” to the spirit of John Coltrane, a gratitude filled homage to the man whose life and music acutely affected the great vibraphonist’s own approach to the deep calling that has made his own life a most rewarding one.  In describing his reasons for choosing this particular repertoire he says simply, “Songs that I like, things and stories that I like … These melodies have a natural order to them; the question and the answer of them - the boldness and the strength of them, things that are very natural.  So that’s the reason why that I got these songs. Even when they weren’t written by Trane, some of the songs that Trane played you see those same thoughts.”

The title track, “Wise One,” is one of Coltrane’s most intensely contemplative works – first recorded on 1964’s Crescent date, it is purportedly an encore dedication to the saxophonist’s wife Naima in gratitude for her prudent counsel during the period of his spiritual awakening that was more explicitly addressed on his Love Supreme album.  The boppish “Like Sonny,” is taken at a brisk tempo here.  First recorded at the 1959 session that produced the classic Giant Steps record, but not released until later on Coltrane Jazz, it is of course Trane’s tribute to his fellow saxophonist, the great Sonny Rollins.  “Aisha” was mistakenly credited to Coltrane when it first appeared on Olé.  The beautiful love song was actually composed by Hutcherson’s friend and frequent collaborator, pianist McCoy Tyner, for his wife.

“Equinox” is one of Trane’s most spectacular compositions, a high point of his Coltrane’s Sound album and this one as well.  The Latin tinged minor blues proves to be an excellent vehicle for Hutcherson, whose vibes soar with climactic intensity, inspiring equally exhilarating contributions from his colleagues.  Bandleaders Count Basie and Benny Carter and vocalists Billie Holiday and Ella Fitzgerald had already covered the popular standard “All Or Nothing At All” when Coltrane immortalized it on Ballads, ensuring its permanent place in the modern jazz repertory.  Here the piece is arranged at a breakneck pace over a Latin rhythm, provoking an enlivened workout by the group, propelled by Marshall’s driving drums.  “Nancy (With The Laughing Face),” this date’s second song from the Ballads album, is taken at its traditional slow dreamy tempo here, demonstrating Hutcherson’s mature mastery of the form in the tradition of his early idol Milt Jackson.

Coltrane’s “Spiritual” is another of his religiously inspired works, transforming the gospel music sounds of his family church upbringing into his own rhythmically innovative personal language.  Marshall’s Elvin Jones influenced drumming dramatically opens the piece, which Hutcherson and company perform with a gratifyingly restrained intensity.  Harold Arlen and Johnny Mercer’s “Out Of This World” from the Coltrane album is, like “All Or Nothing All,” taken at a much faster than usual tempo, allowing each of the quintet’s members to tastefully exhibit his instrumental virtuosity.  The closing “Dear Lord,” from Trane’s posthumously released  Transition record, is a beautiful devotional offering from the composer.  The relaxed prayer is a most appropriate conclusion to this exceptional date.

Atop of the towering arch at Washington Square, in the Greenwich Village neighborhood where Trane first recorded “Spiritual” live at the Vanguard, is the inscription Let us raise a standard to which the wise and the honest can repair.  The event is in the hands of God. These inspiring words, first delivered by George Washington to his troops, might just as easily been spoken by John Coltrane to his fellow musicians when creating the music that is recast here.  Hutcherson himself says much the same in philosophizing his approach to music and life. “You do the best you can, but the main thing is knowing where you’re coming from and realizing that the magic that you’re reaching for has nothing to do with you. You’re just asking to prepare yourself so that it can come through you.  You can’t possess any music and you can’t possess any song; you can’t even possess your own life. Nothing’s yours, but you can certainly give an example and direction and be an example in things that which you should do.”


"This thoughtful, stylish improviser has mellowed into a veteran ... to savour -

- A CLASSIC
"The Swiss based Kind of Blue label has crafted a catalog of jazz recordings
with great quality under the direction of Roy Tarrant..."Wise One" is an
oustanding release...the satisfaction exceeds Hutcherson's previous release
"For Sentimental Reasons, which notably became the label's all-time best
seller."

"Wise One" is dedicated to John Coltrane and underscores time and again the
profoundly spiritual connection that links the two musicians...an intriguing
array of pieces that combine fluid improvisations and nimble
interplay...engaging, pulsating personality."

"The vibraphonist...paces his improvisations beautifully on this Coltrane
tribute. The direct simplicity...is a lesson in extracting maximum emotion
with minimum fuss."

...the quintet that Bobby Hutcherson leads manages to get over shimmering sustained notes...silvery rain...
Downbeat